Within the framework of the research on process in psychotherapy, Wilma Bucci has initiated an attempt to reformulate and widen metapsychological concepts as well as the scope of psychoanalysis towards the contents of neuroscience and cognitive science. Such intent has contributed in developing the multiple code theory: a theoretical-empirical basis for the development of a research method on the evaluation of referential activity â€“ measure of the therapyâ€™s global progress through the transcriptions of the sessions. The method ranks in the course of the research on process and stems, as many empirical methods of therapeutic change evaluation, from the crisis of Freudâ€™s metapsychology, documented by the various controversies on the theory of the mind at the basis of psychoanalytic practice. From such controversies, it was acknowledged that psychoanalysis requires a modern theory explaining the fundamentals of clinical practice. Bucciâ€™s theory represents a development of Freudâ€™s differentiation of primary and secondary process: two distinct modes of thought that cannot be proposed in modern reality, since their validity has not been proven yet. Bucci proposes, instead, a three-fold thought and memory organization including verbal symbolic, non-verbal symbolic and sub-symbolic modes of thought. The integration of such modes should accompany the individual in every daily situation, by appearing in his/her language; an example, within psychotherapy, is the patientâ€™s free associations. Following traumatic situations, the three systems of thought may not function in an integrated manner: in this sense, psychotherapy may represent the instrument to restore the combined functioning of the three systems.

This work is licensed under a Creative Commons Attribution-NonCommercial 4.0 International License. 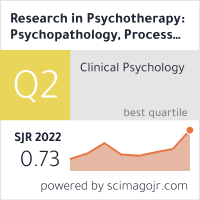 is an Open Access, peer-reviewed journal published by PAGEPress®, Pavia, Italy. All credits and honors to PKP for their OJS.